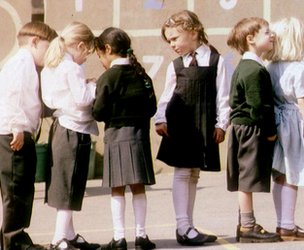 A team led by researchers at the University of California, Riverside, "assigned" children three acts of kindness each week for four weeks.

After the four weeks, children were happier and more liked by classmates.

The researchers say than encouraging such simple "positive acts" could help children to get along with classmates and even prevent instances of bullying.

The findings are published in the open access journal Plos One.

Working with 400 school children aged between nine and 11, the team assigned whole classrooms either to perform and note down three kind acts per week or - as a control group - to keep a diary of three locations they visited each week.

The kind acts were not necessarily directed towards their classmates. Some examples of the things children reported were: "Gave my mom a hug when she was stressed by her job", "gave someone some of my lunch," and "vacuumed the floor".

"Before the four weeks, we had each student circle [the names] of students from their classroom who they would like to be in school activities with," explained the lead researcher, Kristin Layous from UC Riverside's department of psychology.

The children were asked to repeat this same "nomination process" at the end of four weeks.

"Both conditions - kindness and comparison - received more nominations from their classmates after the four weeks were over," explained Dr Layous, but students in the kindness [group] gained significantly more nominations than the [other group].

"The most interesting finding to me is that a simple positive activity can promote positive relationships among peers," said Dr Layous.

She suggested that by reinforcing social connections between children in this simple way, schools could help to combat bullying.

"I was not completely surprised that students increased in happiness, because we have found the same effects in adults," said the researcher.

"[But] I was surprised that a simple activity could change the dynamics of a well-established classroom.

"This study was conducted in the spring, so students had already known each other all year. For them to nominate more peers at the end of a four-week activity period is promising."